Ads
Analytics
Cast
DRM
Integrations
Mediatrack
Miscellaneous
Network
Player
Texttrack
UI
IntroductionIs it possible to remove an element from the UI?How to align the timeline in the middleHow to change the Big Play Button?How to make the control bar always visible?Is it possible to hide/disable the google-IMA UI?How to build a Chromeless UIHow to insert a buttonHow to change the default UI language to otherCustomize UI during ad playbackHow to change how a video should be fit inside of a containerHow to make an audio-only playerCustomising the UI: vertical volume sliderUI SkinningHow to detect the visibility of the default control barHow to disable click to pause
License
Objective C

THEOplayer has a default user interface (UI). The default UI is optimized for browsers, mobile devices and tablets. As a developer, you may A) use this UI as is, B) customize it, or C) create a brand-new Chromeless UI, as depicted in the screenshot below. 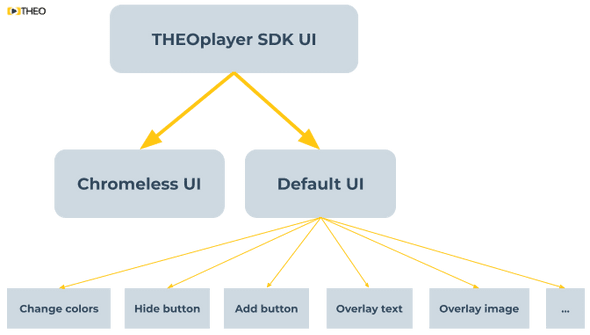 The default UI is responsive, so it looks different depending on your device, as visualized in the screenshot below. 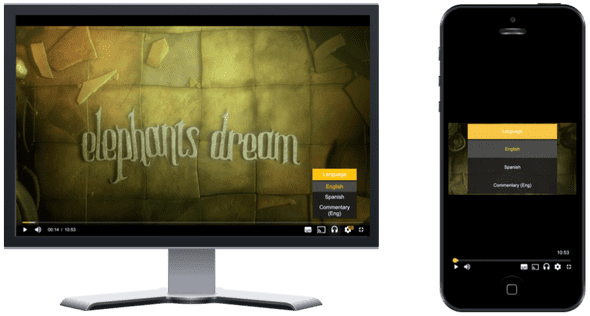 The default UI has all the basic controls you'd expect from a video player, ranging from a scrub bar to a fullscreen button.

Building a Chromeless UI means building a new UI from scratch using the THEOplayer API and custom application code. In other words: you are responsible for inserting your own controls (e.g. a play button), and connecting it with the THEOplayer API (e.g. player.play()).

Note that some features are dependent on our default UI, because they are built on top of our default UI. For example, the Up Next feature (and API) wouldn't work when you build a Chromeless UI.

The next sections tackle the following topics:

The default UI has all the basic functionality you expect from a video player, but it might be missing some more exotic UI (or UX) features. Changing the colors of the default UI is relatively straightforward, as is hiding a default control item (e.g. the fullscreen button), as is inserting a new button in the default control bar. However, truly transforming the default UI, such as repositioning elements, using all new icons, and more complex operations, can be quite challenging.

Implementing a Chromeless UI gives you total control of your UI and UX. However, this requires an understanding of video and the THEOplayer API, and you might feel like you're reinventing the wheel.

So what to pick: modify the default UI or implement a Chromeless UI?

If you are targeting mobile applications through our iOS and Android SDK, you should consider the fact that you'll be using JavaScript and CSS to modify it. You may like this (because you can re-use it across iOS and Android), or you may dislike it because you have to operate outside of your "native codebase".

Furthermore, if you're using frameworks like React Native and Flutter, modifying a WebView contained by a native module might be another consideration.

Our default UI is not optimized for big screen devices like Samsung Tizen, LG webOS and Android TV. If you're targeting those (and similar devices), you should consider implementing a Chromeless UI, as demonstrated on our Tizen and webOS Github repositories.

Our default UI for Apple TV (i.e. tvOS SDK) is similar to the default Apple TV video player. You should consider a Chromeless UI for this platform should you want to divert from this design.

You can modify the default UI through JavaScript and CSS. 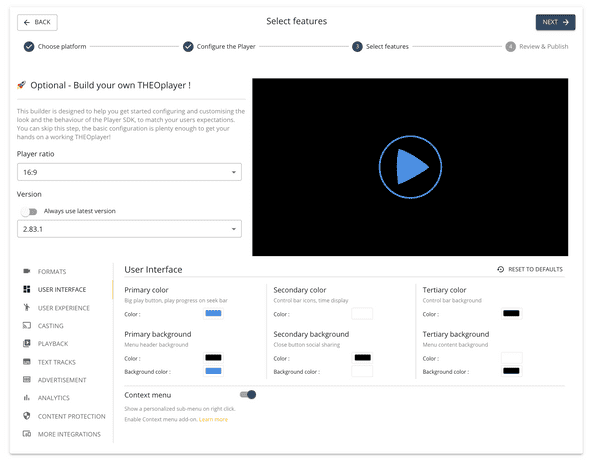 The default UI is a fork of Video.js 5, so you may also use the Video.js 5 API to modify the UI, as demonstrated in some of our articles. This may -for example- simplify the process of adding a new button to the default control bar.

Removing a button is a matter of identifying the appropriate CSS selector, and configuring display: none!important.

Overlaying text and images is a matter of overlaying a custom <div> (or native element) on top of the THEOplayer container.

The default UI on our iOS and Android SDK is the same UI as our Web SDK. This default UI is implemented by overlaying a WebView on top of the video player.

In other words, to modify the default UI, you should use JavaScript and CSS, as explained in our customization articles for Android and iOS.

Below are some articles related to modifying our default UI:

Building a Chromeless UI may be daunting at first, but it's rewarding. A Chromeless UI gives you full control over your UI and UX, but you must understand the flow of a video, its API and its events.

Refer to our article on How to build a Chromeless UI for more information.

You can implement a Chromeless UI on iOS and Android completely on top of THEOplayer through the native technologies and programming languages. The THEOplayer API exposes all the events and properties that you need to implement a custom design.

Alternatively, for these mobile SDKs, you may implement your Chromeless UI in our WebView, as this allows you to re-use your implementation across Android and iOS.