This article describes how to implement common use cases related to the Up Next feature - for example how to use the API.

The Up Next feature adds a component to the UI which enables the viewers to navigate to the upcoming asset, but also automatically loads this asset. This can be useful if you want to increase the engagement and consumption of your users.

The Up Next feature exposes the Up Next API. This API allows developers to configure the upcoming asset and its loading settings. 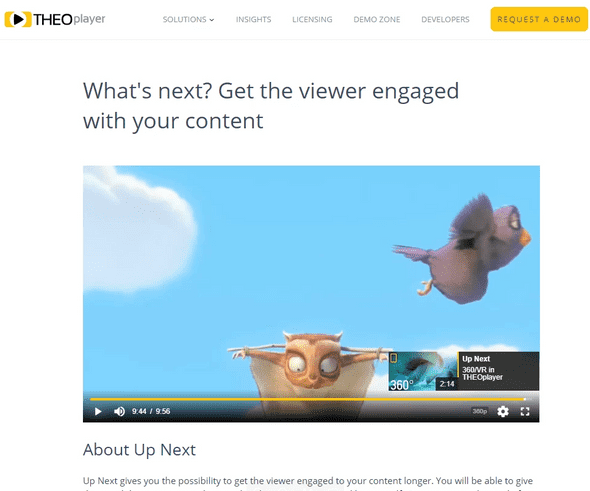 How to use the Up Next API

The Up Next API is a UI feature and automatically loads upcoming content. Since it loads new web pages (and not just changes the video source), it is not relevant for other environments than web.

This example explains how you do a basic implementation of the Up Next API.

The Social Sharing API is currently only available on the Web SDK.

The snippet below demonstrates how you could configure the Up Next API.

This API is currently not available on the Android (TV) SDK.

This API is currently not available on the iOS (/tvOS) SDK.

The demo below illustrates the Up Next API in production.

The following remarks can help: