This article provides information on how to customize the look and feel of a Chromecast Sender application or a Chromecast Receiver Application. 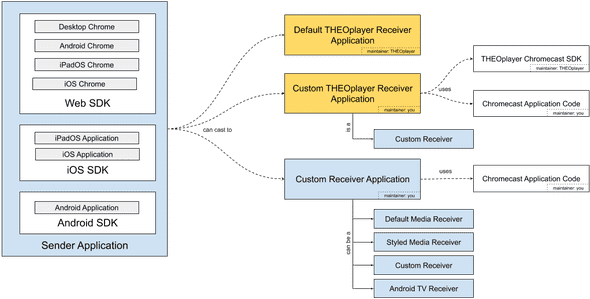 The following topics are discussed:

Google describes three Cast APIs: the Android API, the iOS API and the Chrome API. The THEOplayer SDKs integrate these Cast APIs and expose a wrapper API for developers to use instead.

In a Sender application, you use either the THEOplayer Web, iOS or Android SDK.

In a Receiver application, you use the THEOplayer Chromecast Receiver SDK.

If you are using the THEOplayer Web, iOS or Android SDK in your Sender application, confirm that the chromecast module is enabled for your SDK. This feature exposes a Chromecast API you can benefit from. Additionally, ensure that you include the Chromecast library.

Please refer to "Connecting from custom Sender applications" if you are not using THEOplayer's chromecast feature.

Generally speaking, there are three types of user interfaces:

THEOplayer automatically inserts a Chromecast button in its default video player UI if you are using THEOplayer's default UI. 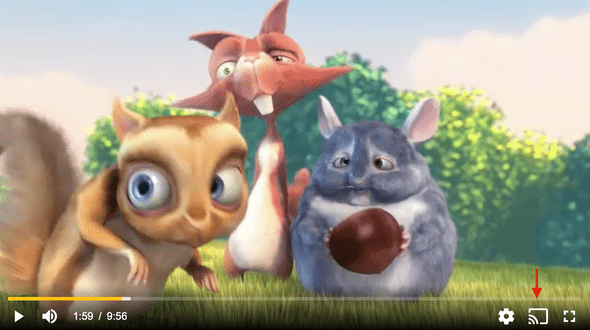 The UI of this button changes when the Chromecast state changes. Please see below if you want to alter this default UI.

Familiarize yourself with the above APIs if you want to change the appearance of your Chromeless UI and its relation to Chromecast.

If you are using THEOplayer's default UI, but want to use your own button instead, then you can hide THEO's default button, and insert a new one instead. You also need to use our Cast API described in the above "Chromeless UI" section.

If you are connected to THEOplayer's default Receiver application, you cannot modify its appearance.

You can build a custom Receiver application by using our Chromecast Receiver SDK. Once you went through its Getting Started Guide, you'll notice that the UI is similar to the default UI. However, through this approach, you have the option to alter the UI as described by the Getting Started Guide.

Then, decide which states and which components you want to customize. Finally, identify which THEOplayer APIs are relevant for your use-cases.